Beyond the constraints of reality: SARCHA at the Bartlett MArch Urban Design final crits 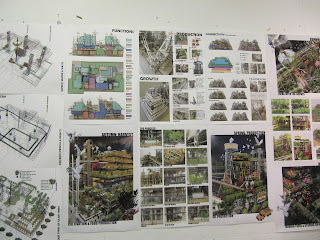 image: Jiang Nanchen’s proposal for the transformation of an Athens city-center block into a productive unit by introducing the ‘industry’ of olive trees from cultivation to the production of food, wood and oil.

It was refreshing to review projects beyond the constraints of reality designed by the Bartlett MArch UD students following their trip in Athens in January 2012 and their collaboration with SARCHA on the staging of the Polypolis game in the London Festival of Architecture – Cultural Olympiad, June 2012. On August 28-30, 2012, Maria Theodorou joined the final crits of Unit 2 (tutors Robert Dye and Jason Coleman) and Unit 3 (Nicholas Boyarsky and Camila Sotomayor) of Bartlett’s MArch Urban Design 2011-12 (director Colin Fournier) and entertained the possibility to see and discuss the 20 imaginative proposals in Athens in the context of SARCHA’s co-fertilization with architecture schools from abroad in the coming year. More info to follow.
Posted by www.sarcha.gr at 2:07 PM No comments: Links to this post

You may also deposit your donation at sarcha's account

www.sarcha.gr
See what is sarcha video at https://www.youtube.com/watch?v=Uvxsw3KaNuw and read Maria Theodorou, Notes on SARCHA, text at www.sarcha.gr/Resources.aspx (13/3/2011). Visit and LIKE https://www.facebook.com/SchoolOfAchitectureForAll